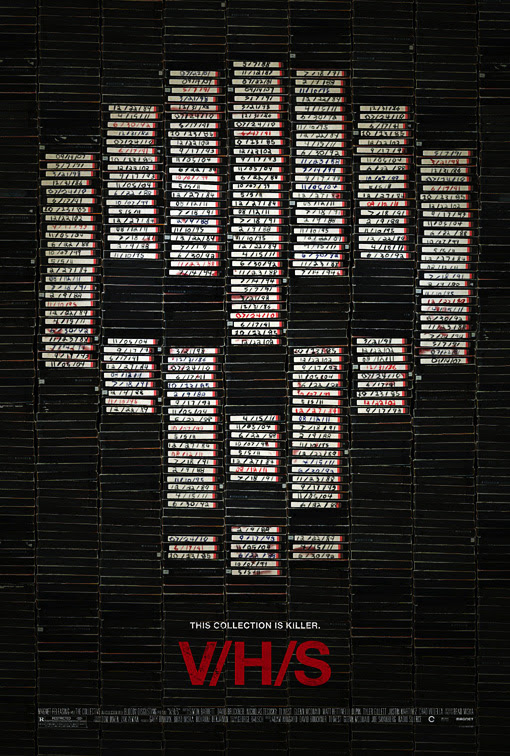 With the recent release of V/H/S 2, I thought I would give the first a look. With many people choosing to watch movies online, films get a much wider release than they ever would have before, with the internet opening up the viewing possibilities and making it much easier to come across movies you might not have watched in the past. V/H/S was an incredibly popular entry into the anthology horror sub genre, and I for one found it enjoyable, with only one of the segments which didn't really hit home.

V/H/S is incredibly effective in it's execution. It is profoundly disturbing, manipulating the audience to care for some despicable characters.Each story has very little in common with the last, but when the movie is viewed as a whole, they actually fit together. This is down to the smart direction, an excellent wrap-around story and realistic camerawork. It may be shaky, but not overtly so, and manages to draw the viewer in deep, coming up with many different and clever ways to instill fear into the audience.

The characters in the movie communicate with each other in a more jokey way, as they know this footage is going to be watched back by others, so they tend to involve the viewer with jokes and inciting the viewer to get excited over things that are happening. When something bad happens (which it does. This is horror remember) the characters come cross as truly shocked, them being on camera gives off a feeling of genuine surprise and a genuine reaction to what is going on.

The movie tackles a wide range of horrific subjects, from Succubi to a religious haunting, there are many ways this movie can chill the blood, each giving a different perspective on the sub genre they are celebrating. It may have a long running time (nearly two hours) but nothing feels forced. Everything comes together in spectacular fashion, and the directors involved should be praised for creating such a spine chilling anthology.