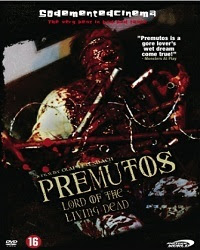 Any regular viewer of Olaf Ittenbach's movies certainly know what they are getting when they watch one of his movies, and that is blood and gore. Forget any kind of challenging story or deep emotion, these movies are all about the red stuff! His movies really are a gore lovers dream. There is so much blood and gore, that sometimes (on rare occasions) it can be a little too much. If you see one person get their head blown off in a movie, it's a shock. See it happen to five more people, it becomes tiresome. Maybe that's just me, but nevertheless, it has happened to me before.

Premutos is the first fallen angel, even predating Lucifer. He is summoned to the earth again and again, creating wars and other plagues on humanity. A young mans father has found a book in his yard, and this book helps Premutos possess the fathers son, Mathias. When Premutos does take over Mathias in an incredibly brutal and bloody metamorphosis, all hell is unleashed on his fathers birthday party.

Ittenbach has an incredible talent for making gore films. He was arguably at the top of the German splatter scene when this movie was released. He is an amazing FX artist, and his work never fails to make the viewer cringe and wince at the atrocities being portrayed onscreen. Premutos also has a blackly comic undertone which works incredibly well along with all of the bloodshed and dismemberment.

While the story may be rather basic and a little incoherent, there is character development, but it really does take second place to the carnage. Some of the flashback scenes are shot with considerable flair, which both belies Ittenbach's detractors, who enjoy stating he has no visual flair, and the low budget of the movie. The crucifixion scene, as well as being blasphemous, is an incredibly well directed scene with beautiful photography and great composition.

Premutos is a movie that isn't supposed to be taken seriously under any circumstances. It is here merely for our entertainment, and in that respect, if succeeds on every level. It is an insanely gory movie that delivers amazingly realistic FX, all the while it's tongue is planted firmly in it's cheek.