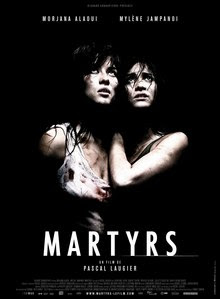 The French are known for their take on horror, and how it pushes things to extremes. The hype that surrounded Martyrs on it's release was magnificent. I could barely open a magazine without someone proclaiming 'Martyrs is insanely gory' or 'It is the most brutal film ever made'. While Martyrs is a dark and uncompromising film, it certainly did not live up to the hype that surrounded it, at least on my first viewing. This movie is certainly a transcendent experience, and goes beyond simply watching a movie, as it implicates all of humanity in its brutalities. This movie, as Salo: 120 Days in Sodom before it shows the callousness of the powerfully rich towards others not as fortunate as themselves, and that absolute power corrupts.

The film tells the story of a young woman called Lucie, who was the victim of unspeakable torture all through her childhood. She grows up in an orphanage, making a single friend called Anna. We then are propelled fifteen years into the future, and we see Lucie murdering a family in a rather brutal way. Lucie tells Anna that the family were responsible for her torture. Is she insane? Is this the way she normally behaves, going house to house and slaughtering families? The movie answers these questions and throws a lot more your way during it's running time.

Martyrs is the sort of experience many will not enjoy. It's violence is brutally honest, and it's reasoning is utterly realistic. Martyrs is many things. It is an art house movie, a study of the human state, a horror movie and an analysis of religious extremism. It manages to encompass all of these things and create a truly disturbing vision and unsettling vision.

I will admit to being severely disappointed with Martyrs upon first viewing. It wasn't until my second viewing that the power of the movie hit me. The film certainly makes it's points well, and isn't afraid of using terrible violence to show just how dark humanity is. The movie may throw a lot at you, but the ending couldn't be more beautiful and sickening in it's brutality, and there was certainly a method to all of the madness that went on before the truly shocking finale. Whether it was right or not is left totally to the viewer, and maybe that is one of the most disturbing aspects of this movie.

It doesn't tell you how to feel. It isn't saying anything in the movie is wrong or right. It lets you make your own choice. This is a movie that welcomes you to think about it's outcome and all that went before. The movie certainly takes you through many emotions. It is intense, disorientating and upsetting, but it is also strangely uplifting. The end of the movie is such a shock, it will have you questioning your very own existence. That is how powerful Martyrs is.