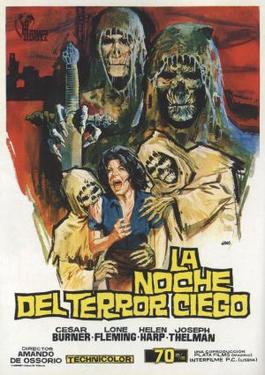 It has taken me many years to acquire and watch Amando De Ossorio's Blind Dead films. I really didn't know what to expect, having read so many conflicting reviews on the first film. I can happily report that I was pleasantly surprised on all fronts.

While on vacation, a young couple run into an old friend. when her boyfriend invited the friend to accompany them on a trip, his girlfriend leaps from a train and spends the night in some abandonned ruins which hold the still living corpses of Knight of the East; Satanic knights who were punished and murdered for their crimes and had their eyes pecked out by crows.

I watched the Spanish version, 'La Noche Del Terror Ciego, and I was largely impressed. The film oozes atmosphere and suspense from every frame. The Blind Dead are some of the scariest creatures I have had the pleasure of viewing in a horror film, and the sequences shown in slow motion take on an almost ethereal quality, and it managed to send chills down my spine (the first dream I ever had, or at least the first one I ever remember was of horseriding skeletons swinging theirn swords and decapitating onlookers with glee. It finished with the swirling Hanna-Barbera star, but in place of the star was a skull with thin hair attached, and instead of the quite upbeat theme that accompanied the logo, a ghost train scream took its place).

The film led me to draw many similarites with Hammer horror films. The archaic setting, the paranoid villagers who warn people off visiting the ruins, even the moments of bright red gore (which are few and far between) bought to mind the British powerhouse of horror.

Another point worth noting is that the Knight of the East (or Templars, as they are more commonly known, but are never referred to as such in the first film) do not eat their victims. They feast on their blood after attacking them with swords and their well realised and rotting hands. They really are the stuff nightmares are made out of, and I would go as far as to say that they rival Gianetto De Rossi's zombies in Zombie Flesh Eaters and The House by the Cemetery.

The cinematography is a thing of pure beauty. Breathtaking scenery full of life contrasting greatly against the lumbering corpses of the Blind Dead. Those knights riding the horses in slow motion. Its an image I am not likely to forget in a long time. It really is a feast for the eyes in every sense.

I had heard the film was rather slow in developing its story, and while this is true, it only adds to the macabre goings on. The music and sound design also work to the films advantage, creating one of the most effective and genuinely creepy horror films I have seen in such a long time.

I urge any fan of euro-horror, or anyone with even a passing interest in zombie movies to check out La Noche Del Terror Ciego. It has a power lost in many of todays movies, and its lumbering villains are one of the most memorable embodiments of evil I have ever witnessed.


Posted by doctorcarnage at 11:08 No comments: