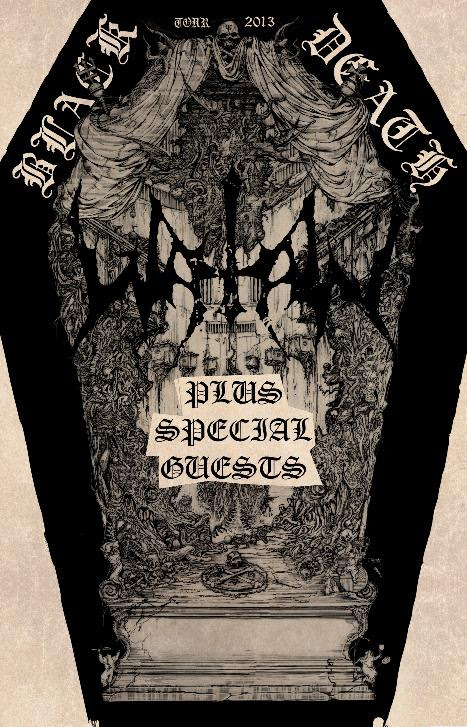 The night was as dark as can be. A crescent moon hung in the sky like the scythe of Satan coming down to destroy humanity in one fell swoop. This night belonged to Watain. This was their third date in the U.K on their Black Death tour of Europe, and the atmosphere outside was one of darkness and anticipation.

The strangest thing happened outside while we were queuing for this show. There were regular looking (compared to the black t-shirt and leather wearing Watain fans) in the same line. My brother proceeded to tell anyone who asked if it was the line for Watain that it was actually the que for Subway, and all he wanted was a meatball sub. Then a couple of ladies in front of us asked who we were there to see. My brother replies "Watain. Who are you here to see". They then looked at each other and one of them said "we don't want to tell you incase you kick our heads in". We did manage to find out that Hanson were playing the same venue, after we explained to them that we aren't the sort of people who go around randomly kicking peoples heads in for not appreciating the same music as we do.

The support bands Watain had chosen were mediocre to say the least. Doom/drone band Coltsblood definitely had the volume to shock the audience, but the music just happened to be too repetitive, with a single riff repeated over and over again, time and again. While I understand that is a pre-requisite with doom/drone bands, it just didn't seem to work for me this time, and by the last song (luckily) I was discussing just how bored I was with their set. Just to let my readers know, I am a fan of Khanate, Reverend Bizarre etc, but for some reason, Coltsblood just didn't do it for me.

Next up to take the stage were Funeral Throne. I could not take them seriously. One of the guitarists looked like he was a rabbit caught in the headlights, constantly opening his eyes as wide as he could, and then attempting to snarl. It gave the impression he had something on the end of his nose, and was trying to focus on it. While the bassist exuded the most energy, my brothers girlfriend commented how it looked like he was making his "sex face". Cue smiles and laughter.

The music was well played though, but I couldn't put my finger on Funeral Throne's style. It seemed to be a mish-mash of black metal, death metal and even a hint of groove sometimes. Not something that I would choose to listen to, but there were a few people who seemed to enjoy it, and I suppose that is all that matters. They just didn't strike  chord with me. Maybe it was the anticipation for the headliners. Maybe the support bands just weren't very good.

I was only there for one band though, and yet again Watain fail to disappoint on every level. While the blood, fire and death stage show has been toned down considerably, (no smell apart from incense, and no fire apart from three candles) the new backdrop, the pure sense of evil and frontman Eric Danielsson's spiritual performance made everything that came before instantly forgettable.

As mentioned, the stage show has been toned down, but this allows the audience to pay even more attention to the diabolical music Watain play, each song as perfect as the last. Through eleven tracks, Watain take the audience on a journey to hell, playing classic after classic. A number of the songs are taken from the new album, and it even surprised us that they played "The Wild Hunt", one of the slower and more melodic cuts from their new album of the same name. The band finish on "The Waters of Ain", a near fifteen minute journey that means they run nearly twenty minutes over the curfew. The crowd ate up the misanthropy, this little glimpse into the world of Watain. What they continue to show is that they will not be pinned down by musical restraints or conform to a certain expectation of their performance. Watain are a force unto themselves, and the sheer power they displayed with their presence and music made the night complete.  This was only the third date in the bands UK tour, and for them to play such a blinding show is testament to just how powerful Watain are, both as a band, and as an otherworldly force breaking through the darkness into our world

The setlist for the show was as follows:-


Posted by doctorcarnage at 08:54 No comments:

The mighty black metal masters Watain have released a music video for their track "Outlaw" taken from their diabolical opus "The Wild hunt". Be sure to check the video by clicking HERE.

The video is produced by Watain and Johan Bååth who already directed the band's OPUS DIABOLI dvd in 2012.


Posted by doctorcarnage at 11:41 No comments:

Deicide "In the Minds of Evil" album review.

26 years of blasphemy, hatred and ferocity have bought us to "In the Minds of Evil", the new release from the mighty Decide. Along with classic albums such as their debut, Once Upon the Cross and The Stench of Redemption, there have been a number of complete doozies released by the band such as Insineratehymn and In Torment In Hell. Where will "In the Minds of Evil" fall in with previous Deicide releases?

Well, after numerous plays over the past week, Deicide have yet again released a beast of an album. The one two beating of "In the Minds of Evil" and "Thou Begone" start the album off in an incredibly heavy and furious fashion, and the album looses none of it's ferocity throughout it's thirty seven minute running time. Each song hits you right where it hurts, and reminds the listener just how good, heavy and downright evil Deicide can be. Gone is the tired and lazy sound that was apparent on the two previous albums, to be replaced with a high energy performance in almost all respects.

The first thing that hits you is just how good everything sounds. From Steve Asheim's pummelling drums to Jack Owen and Kevin Quiron's leads and monstrous riffs, everything is so clear, crushing and heavy. Then the songs hit you. Each one drives the band further into the death metal maelstrom they create. The energy this album demonstrates is magnificent. Each track is filled with malice, hate and some of the heaviest riffs Deicide have ever laid down.

The only thing that bothered me about the album is Glenn's vocal performance. Gone are his screams of anguish, only to be replaced by his monstrous but monotonous growl. In every song. It just get's too much sometimes, although his pronunciation and phrasing have improved immensely since Deicide's debut., but that doesn't help his performance feel tired and similar in every song, but this is just a small niggle, because in the grand scheme of things, this is easily Deicide's best album since "The Stench of Redemption". The solo's are also worthy of a mention, moving even further away from the sporadic and Slayer-esque solo's of the Hoffman's, to more rock/blues influenced soloing that has been adapted to fit the death metal template.

"In the Minds of Evil" is Deicide's strongest release for a long while, and goes to show that Benton's hatred of religion is not being tempered with age. It is as strong as ever, and if Deicide carry on releasing albums with the power and fury of "In the Minds of Evil", I will follow them into the mouth of Hell time and again.


Posted by doctorcarnage at 11:24 No comments: 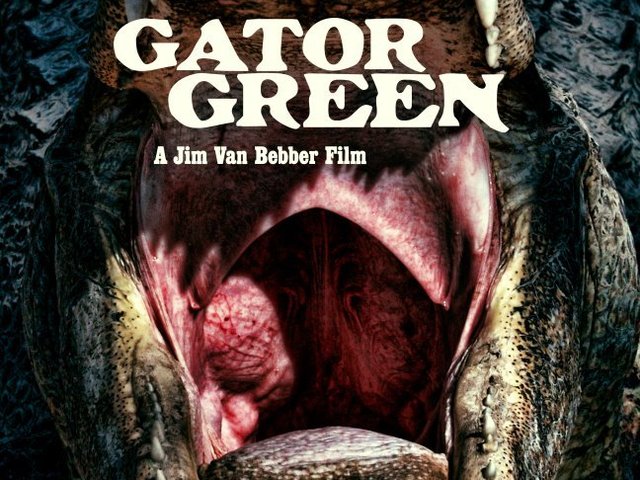 Jim VanBebber. A legend in underground cinema, and his partners Stephen Biro and Scott Gabbey (collectively known as Team Gator green) are looking for seed money for launching their company, securing first rate legal representation to prepare an investor offering, create pre-production materials and to produce quality Gator Green investor parties to aid in the investment of the production of the feature film.

Team Gator Green are NOT after the films budget, and unlike some Hollywood crowd-funding projects, they really need your support.

Fellow film fans, let us all pledge what we can, or help to spread the word on what will undoubtedly be an incredible piece of horror cinema.

You can visit the Gator green Indiegogo campaign by clicking HERE.


Posted by doctorcarnage at 05:18 No comments: