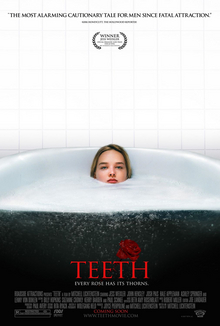 Alright. The plot is simple. Weird, original (I'll give it that), and simple. It is the story of a high school girl named Dawn whose vagina is filled with razor sharp teeth. Yeah , you read it. I have seen previews and have heard a lot of my friends tell me to see this. Granted they told me it wasn't really good, but I still had to see it. Uh...no I didn't.

The movie starts with Dawn, and she is part of a club at school for people who wait until marriage to have sex. She goes and speaks to younger kids and tells them about promise rings, abstinence and such. She meets a boy who also promises to wait until marriage, and they eventually become a couple. One day they go swimming together and find a cave to fool around in. He tries to rape her, but she fights him off. However, she smacks her head on a rock during the struggle and becomes dazed. He takes advantage and is successful in raping her. Suddenly *CRUNCH* he loses his penis (sigh). Yup. This goes on for the rest of the movie.

She finally meets a guy who can have sex with her, since it's consensual and in a relaxed state. But when she finds out he's using her, he loses it too (sigh again). Oh, and her step brother also wants to have sex with her. He does and loses it. But his dog has a snack afterwards, if you can read between the lines.

Let's see. The acting isn't great. The story is interesting, but the explanation of the cursed vagina is stupid in my opinion. All the camera shots to the things that resemble holes or dicks are overplayed. Like holes in trees, spikes in caves hanging down. Once or twice would have been fine, but it's constant overkill here. However, the gore is pretty good and will make a guy wince. I did a few times. No lie. But it isn't good enough to save this movie for me. If you're still interested, I say go for it. It might be for you, but it wasn't for me.


Don't forget to check out and subscribe to Eric Hyde's Youtube channel Hey, Internet Eric Here. Great reviews and great vlogs. Do it!
Posted by doctorcarnage at 09:25 1 comment:

I've just got back from seeing Hardcore Henry, and it is simply mind-blowing. I say this as bluntly and without any form of pretense. It is a fresh, violent and bloody take on action-cinema that successfully pulls off something completely different, which in this day and age is a feat in itself.

I am not going to give anything away, as it works so much better knowing very little about the film, suffice it to say that if you aren't a fan of uncompromising violence, humour and films shot in the first person, then you would be well-advised to stay away, as this is Hardcore Henry in a nutshell.

I recently posted on Facebook that Hardcore Henry is now my favourite action movie, knocking The Raid 2 into second place. While The Raid 2 is an incredible film with complex characters, fight scenes and brutal violence, Hardcore Henry just seemed to top it all in every single way.

Pure pulse-pounding adrenaline-soaked madness from start to finish. Hardcore Henry is the best cinema-going experience I have had so far this year. It's even better than Deadpool. It's that good, and it doesn't need multiple uses of profanity to attempt to make the film more 'adult'.

Everything you want in an action movie is contained in Hardcore Henry, and there are numerous nods to FPS games such as Half Life, Call of Duty and even Left for Dead. Bullets and fists fly and many die. The body-count is incredibly high, as is the gore quota.

I honestly can't praise this movie enough. I loved every single second and urge each and every one of you to check it out! You won't be disappointed!!