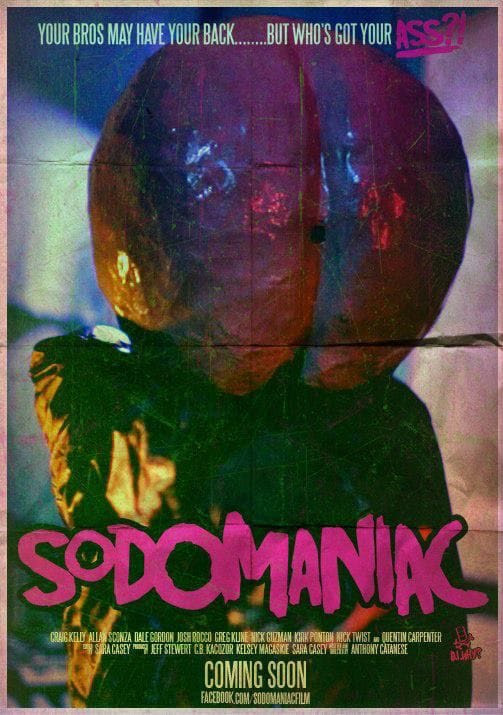 Imagine my surprise when I found an invitation in my 'messages' on Facebook, to watch Sodomaniac, a long awaited slasher movie that I have been eagerly awaiting , and I can tell you right away that it did not disappoint in any way, shape or form. This is a rape/revenge movie with a difference.

The film tells the story of a group of ill-mannered slimeball men, who refer to themselves as 'The Wolfpack'. Their modus-operandi is to drug women, and then to have their wicked way with them. After attending a party, one of the group is murdered by a masked killer who sodomises the man to death. (Yes, sodomises him. To death). We then find out that each member of the womanizing wolfpack are in danger from The Sodomaniac.

The very idea of this film may sound crude, (A rape/revenge movie where male victims are practically sodomized to death) and it is. Brilliantly so in fact. The effects are well handled, and the killers mask (which is basically a bottom/bum/arse/ass) adds underlying humour to his appearences, as well as the obligatory chills he brings. His penchant for sodomising drunken men also adds a darker side for male viewers, which is something different in rape/revenge movies, as the majority of these films seem to focus more on females being raped and getting their revenge rather than men.

Sleaze and depravity seep from every second of film, and the balance of horror and humour is handled incredibly well. The effects do not come across as over the top or silly, which is something that might have pushed Sodomaniac too far into the realm of parody. They remain rooted in reality, and are all the more shocking for it. The kills happen onscreen, and are pretty damn inventive and fantastic!

Sodomaniac has all of the right ingredients to be an underground classic. My advice is to check it out as soon as you possibly can. Prepare to be offended, horrified and tickled. It's all part of Sodomaniac's charm. If you want something as dark as it is crude, as offensive as it is fun, you will find all that and more in Sodomaniac. Go check it out, and watch your back(side)!


Posted by doctorcarnage at 13:49 No comments:


Filmmaker Alexis Gonzalez was kind enough to send me the first vignette from his anthology horror film 'Spookfield' for review. After seeing the trailer for this anthology, I was incredibly excited to check out the mans work.

Unfortunately, studying has taken a somewhat drastic turn on my reviewing, and only now have I finally got around to viewing Alexis' first vignette for Spookfield. If this vignette is anything to go by, Spookfield is going to be one hell of a nihilistic ride into hell, complete with madness, revenge and a healthy dose of gore that manages to shock and stun the viewer.

The vignettes premise is a simple one. A man named Brandon hears his neighbour abuse his son because he isn't growing up to be a 'man'. It becomes obvious that this man has suffered abuse himself, and having to constantly listen to the systematic humiliation and violence towards his neighbours son brings these memories flooding back, and he decides to take action against his neighbours abuser.

The first noticable about this film is the honesty with which events play out. There is no pretentiousness here at all. It is a stark 'Matter-of-fact' story that has no time for subtlety. Sound is used to great effect, and manages to deeply effect the viewer without the need to show the violence that is being perpertrated to the son of Brandon's neighbour, and Brandon himself during his memories of his own abuse and humiliation.

When Brandon takes out his form of justice on the abuser (who we find out is much more than what we are first allowed to witness), there is a nod to Gialli films, as he wears black gloves, black coat and wears a black mask complete with black fedora. It was a nice touch, as was Brandon philosophising his thoughts on raising a family and on humanity in general.

Although Brandon's victim is given a chance to survive, he doesn't seem to be able to stop himself from being the smear on humanity he has shown himself to be since the start of the film, and things c take a turn for the worse at the end of the segment, which was a very fitting and memorable end to an incredibly psychological and deeply unnerving horror vignette. I cannot wait to see the finished film, as 'Tears of Trauma' is an incredibly promising short, and if the other vignettes of 'Spookfield' follow suit, we are going to have a very effective and deeply disturbing film to keep us horror fans eyes fixed to the screen, and keep on following the films of Alexis Gonzalz.


Posted by doctorcarnage at 08:20 No comments: