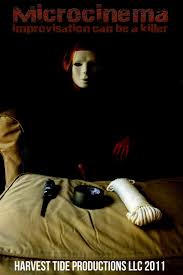 This short begins intelligently, with a masked character talking about how killing is part of a primal instinct of man, then telling us how he is no longer an observer, and that he is going to participate. We them move to the entrance of some woods, with the character filming a woman who walks the same path every day. Things take a drastic turn when he confronts the woman, asking her to hold his camera.

Microcinema took my breath away, because not only did it manage to switch the story on it's head so quickly, it also features a violation of a male (something which you'll have to see, as my explanation will do it no service), something which isn't usually seen in any type of cinema. There is very little exposition, but there really doesn't need to be as this is a shock to the system, like being kicked in the stomach very hard. At the start, the male seems empowered, sure of his conquest of his female victim, but this misplaced arrogance is soon conquered and the roles are switched in the most perverted way imaginable.

The framing is perfect, with shots capturing the beauty of the forest. The main character exudes arrogance at the start, but this is soon done away with in a shocking twist. It is brutal, dirty and shocking. Something we all look for in horror. Finally, someone has moved away from making females in horror movies victims, and has portrayed them as the protagonist, and they have done it in such a shocking way, it takes the viewers breath away for more than one reason.

If you get the chance, check out Microcinema. It is a short sharp shock to the senses, and turns the roles of males and females around in a matter of seconds. Truly incredible.