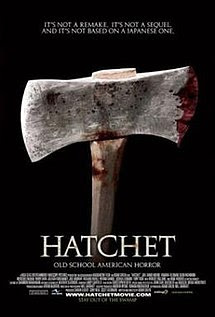 Hollywood seems to enjoy churning out bad horror movies. If a movie makes money, you can be assured Hollywood will milk it for every penny it is worth and then some. In 2006, we were amidst a bunch of terrible remakes that were frankly depressing. Everything seemed to be based on Japanese ghost stories, or PG-13 horror lite films that appealed to the younger generation.

Then Hatchet came along. It bought humor, gore and created another monster to add to the likes of Freddy, Jason etc. Victor Crowley was seen tearing his victims apart with his bare hands as well as a number of weapons in this return to old school American horror. Everything about this movie was something to be loved by fans of the horror genre.

A group of three male college friends decide that after all the boobs and booze they have seen and partaken in on Mardi Gras, they will take a haunted swamp tour. The tour takes a turn for the worse when the boat becomes stranded and they are lost in the middle of the bayou, which is also the home of the legendary Victor Crowley.

This movie impressed me in nearly every way possible, and while I was a little disappointed with the ending being so abrupt, everything that came before was a total throwback to the horror slashers of the 80's. Kane Hodder exorcises all memories of Jason's slow and methodical killings by making Victor Crowley a howling, spontaneous madman who is constantly on the move and will stop at nothing to get to his victims.

The violence and FX in the movie are really special. The blood certainly flows free, and there are plenty of deaths to keep the gore hounds happy. The creativity of director Adam Green is amazing, coming up with such spectacular and violent deaths. It really is one of the movies strongest points.

Every horror fan deserves to see this fantastic movie, and with the third chapter being unleashed very soon, it looks like Victor Crowley is here to stay for a long time, and I for one am very happy in that.