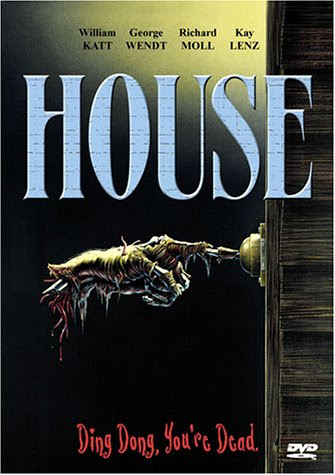 House is another movie that I rented a lot from our local rental store when I was younger, and it has stayed with me ever since. The cover first drew me to the film, the decomposed hand looking incredibly enticing to my young 8 year old monster obsessed eyes. The film was even more enticing, featuring monsters, a zombie, machine gun wielding pterodactyls and the dismemberment of a blue demon and subsequent disposal of the body parts that would make even the most miserable horror fan chuckle.

The story is about a Vietnam veteran whose career as a horror novelist takes a turn for the worse when his son mysteriously disappears while he is visiting his aunts house. The main character then goes back to his aunts house and discovers it is a gateway for evil, and he is also plagues by his memories of an old friend he left behind in Vietnam.

There are some amazing special FX in the movie, like the war demon that attacks the main character from out of the closet, or the gardening equipment which seems to have a life of it's own. A scene that always disturbed me was a wall mounted fish coming back to life. It still makes me cringe to this day.  Weird visions continue to plague the lead character, and many creatures and memories cross over into our world. The way the story develops is gripping, and the monsters never fail to raise a smile or a shiver.

House is an awesome ride, very much like a Ghost Train, full of jumps, scares and laughs. It's such a great blend of disgusting creatures and horror comedy, that it is one of my favorite horror comedy films ever. There may be many disturbing creatures in the movie, but there is a distinct lack of blood and gore, and all of the scenes that should be filled with tension are played out in a lighthearted manner. This certainly works in the movies favor though, as things never become too horrific, keeping a nice balance between horror and comedy.

I loved the way that the movie had you constantly guessing if the main character was going insane, or if it was the house that was haunted. The things that happen to him are inventive and while often cliched, work to the films advantage every time. Never has watching someone think they are crazy been so much fun. Another three sequels were released, to little or no fanfare whatsoever. In my opinion, House is one of the funniest, craziest 80's horror movies out there, and I would be happy to recommend it to everyone.