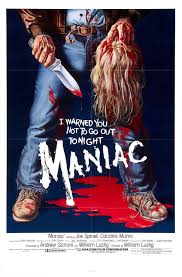 Maniac has to be one of the most darkly disturbing movies I have ever witnessed. Every frame of the movie oozes filth, the grim atmosphere sinking into the pores of the viewer, making them feel dirty. The uncompromising story by C.A Rosenberg and Joe Spinell ,the ferocious FX by Tom Savini and the incredible direction by William Lustig make this a horror classic in every sense of the word. People have called the film such things as filthy trash, an abomination and even the worst of the worst. If that doesn't say something about the power this film has, then by all means, don't read any further.

Frank Zito (Joe Spinell) is a momma's boy, even though his momma is dead. He is an avid collector of dead women's scalps, which he places on mannequins with the help of some nails. He wanders the streets of a particularly grimy New York City, looking for potential victims. He meets a woman named Anna (Caroline Munro, in a role originally made for Daria Nicolodi) and begins dating her. Unfortunately, she turns out to be just like every woman out there. The movie documents how Frank deals with his day to day life, and believe me, it is one hell of a disturbing ride.

The movie is full of disturbing emotion, and the way Joe Spinell plays Frank Zito makes him become so much more than a regular killer. We can see how disturbed he is, and actually begin to feel some empathy with his character. He is so strong with his emotion, it is hard not to.

I still feel that this is one of the greatest, if not most underrated slasher films out there. So the kills aren't spectacular, so the killer isn't a supernaturally powered being who can crush a humans head with his bare hands, this movie more than makes up for that with sheer emotion and uncompromising heartfelt brutality and some truly gut wrenching scenes

Maniac may be simplistic in it's story, but it is the characterizations, and the emotion put into the story that shines through every time. I haven't even mentioned the gore and the ending, which bears a striking resemblance to Don't go in the House, but in all honesty, this really is one of the most sleazy (even with only one scene of nudity) despicable and downright horrific movies in existence. It deserves to be seen by everyone!