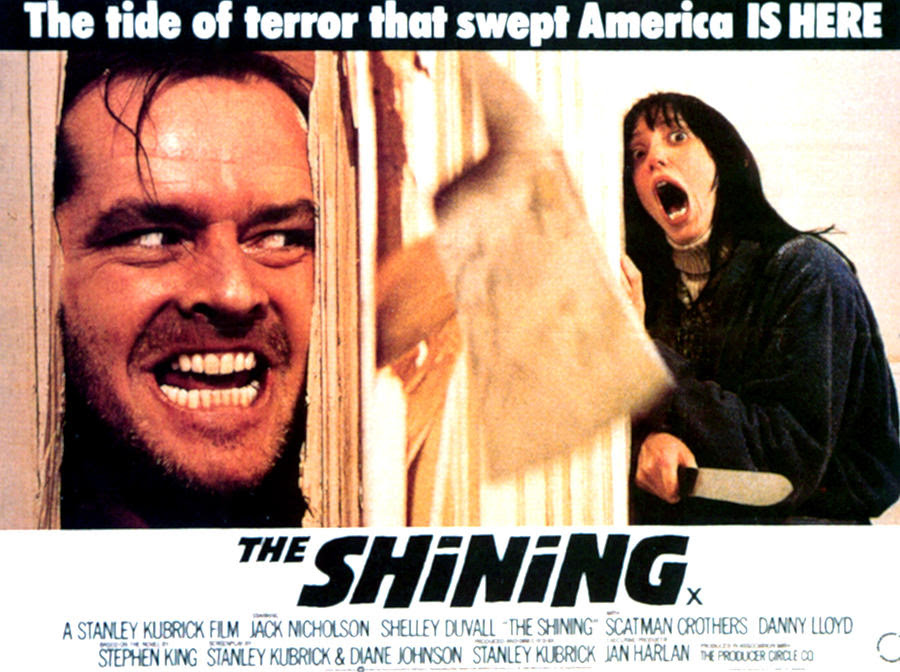 The Shining is one of the most over-rated, slow and boring pieces of cinema out there. In my opinion, because Kubrick didn't include any of the character development or back stories to the characters, the movie becomes completely devoid of having any of the human drama that is key to Stephen King's work. Why does Jack become a crazed killer? Is it just because a ghost tells him to kill his wife? The movie just comes across as a rather flat and boring haunted house film, albeit with some striking imagery that isn't explained and seems out of place.

There are some unintentionally hilarious and cringe inducing moments in the movie. The character of Wendy in the book is a strong willed, intelligent and resourceful woman. In the movie, she spends almost the entire duration whining and disheveled. By the time Jack has her trapped in the bathroom, I was hoping he would get to her to finally silence her, she grated on me that much.

Little Danny talking to his finger? That has to be one of the funniest things I have ever seen in a straight horror movie. I have no idea why Kubrick put this in the film. It is completely out of place, and certainly doesn't movie the story along in any way. As for Nicholson's Jack Torrence? I was under the assumption that he was a man who went SLOWLY insane. In the movie, from the very first shot of him, you can see he already has a few screws loose. The transformation from regular family man to crazed killer is never given any explanation, and happens so quickly in the movie, it doesn't come as a shock in any way. He over acts in every scene he is in, cancelling out any sense of horror that has been attempted (but also failed miserably) and just makes things even more laughable.

Just imagine if this film hadn't been made by Stanley Kubrick. Do you think it would be as universally praised as it is? I have the feeling it wouldn't. I feel critics and audiences would be out in droves, tearing the film down any way they could. But because everyone likes to analyze and read more into Kubrick's work than what is actually there, the film is unfairly held on a pedestal. No other director would have gotten away with making this movie. Only Kubrick.

Kubrick stuffed this movie with cheap visual scares and cliched performances. It fails because he never left any room for the audience to use their imaginations. The ghosts all come across as harmless, preferring to stand there and converse/cackle at Jack rather than attack him.The film is also incredibly lacking in any type of subtlety. The Shining is pure style over substance, and no matter how many times I sit through it, I have never changed my mind. The ending is a joke. Why, when there is such a huge hotel that would have been the perfect place for a cat and mouse chase, does the director decide to take the finale outside into a maze and have the main protagonist freeze to death. It really does make no sense to me.

The Shining is easily the most overrated horror movie in the entire genre. I am a huge horror fan, but this movie contains absolutely nothing that I would even dream of being horror. Kubrick obviously had no grasp of the horror genre, and just threw cliche after cliche at the audience, hoping that something would work. Unfortunately, nothing did.

In my opinion, anyone who say's The Shining is one of the greatest horror films ever made, obviously has no idea what horror really is.