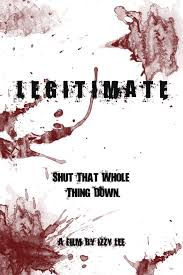 Wow. What a messed up short. I loved it. Legitimate begins with a middle aged politician getting a dance in a club of some kind. It ends with...well, it ends with something incredibly strange that more than fits in with the tone of this short. It is a commentary on the seemingly prevalent attitude to female rape in movies, and that is that 'they deserve it'. It begins with a quote by Todd Aken, which reads " if it's a legitimate rape, the female body has ways to try and shut that thing down". This quote is complete nonsense, but it does bring to mind legitimate rape, and also raises a lot of questions about gender roles.

The movie begins in a club. A man is getting a dance from a woman who is bound in rope. She repeatedly hands him the rope, uncoiling it from her frame, becoming more free as she does so. I felt this was used to show women being untied from the oppression of man. As the rope is removed, the man becomes sleepy, and finally falls unconscious. The short begins by showing us the sexually attractive submissive female, and ends in a terrifying outcome. The women who appear later in the short turn the tables on the politician in the most gruesome way imaginable.

Legitimate is incredibly dream-like, but is a serious commentary, and is so much more than a horror short. It shows a distinct inability for some politicians to movie forward and stop seeing the female as someone who isn't strong, who needs direction from a male.  It is a disturbing look at where some parts of the world are headed because of their views on gender role and this supposed opinion that some rapes are deserving, and the lack of intelligence that goes along with that.