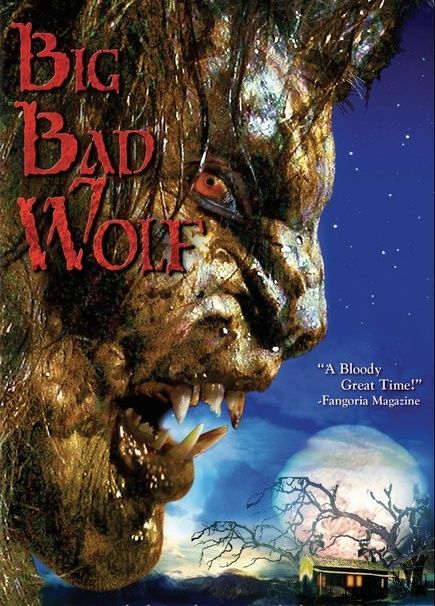 I have never been a huge fan of werewolf movies. I like The Howling, and am a fan of An American Werewolf in London, but apart from those two movies, I haven't seen much else that has inflamed my passion for the sub genre, at least until Big Bad Wolf came along. This movie is everything a werewolf movie should be (at least in my opinion). Gone is unwilling victim of the wolf bite who seems to regret everything their alter ego does. This Big Bad Wolf embraces his animalistic form with great relish, likes nothing more than tearing apart people with his bare claws and does some pretty unspeakable things to his female victims.

A young man, Derek, wants to fit in with his fraternity friends, so he offers his friends the chance to sneak in and stay at his stepfathers cabin for a weekend of partying. Unfortunately, the weekend doesn't turn out so well as the group are attacked, some raped and some killed by a werewolf. Derek suspects his stepdad is hiding a terrible secret, and sets out with his friend, Sam, to find out just what it is.

Big Bad Wolf is fun. Let's get that out of the way first. The movie is filled with hilarious one liners (mostly from the werewolf, who is in full control of what he is doing, not losing his mind as he changes into a monstrous lycanthrope) and crazy and sometimes silly situations. Admittedly, there is a little CGI in the movie, and it rears it's head at the worst possible time (when a character turns into the Big Bad Wolf of the title) but apart from that, the movie has a playful attitude, involving story, great gore (which thankfully is prosthetic) and a wise cracking monster that comes across as bestial and evil, but also intelligent and calculating. What more could you ask for?

This movie certainly knows how to push the boundaries of taste and decency. It is sometimes gross, always funny and has a very nasty undercurrent running through it. It is very reminiscent of 80's horror movies, preferring a playful sense of humor and stomach churning gore rather than going for all out scares and shocks.

Richard Tyson yet again proves he is made to play the villain in an awesome turn as the sinister and vile stepfather who has been cursed with becoming a werewolf, not that he seems too bothered about it. He comes across as the ultimate asshole which again adds to the films nasty streak. When he is in human form, he is sinister and sleazy, but when he transforms into a werewolf, he is firing off quips and one liners which all seem to hit home. When he isn't making light of a nasty situation, he comes across as a formidable and evil creature that wouldn't think twice about tearing anyone apart just for fun. He exudes arrogance and a 'you can't touch me' attitude, and that just makes him all the more unlikable. There are also cameos from David Naughton and Clint Howard, which are both excellent in their small roles. All the other characters are very believable and well acted, but it is Richard Tyson that steals every scene he is in.

Big Bad Wolf may be cheesy rubbish, but it is incredibly enjoyable cheesy rubbish that urges you to keep watching, keeping your attention with over the top gore, brilliant one liners and a real eighties vibe. The screenplay is great and everything falls into place and never feels over played or boring. If you enjoy a bit of entertainment with your horror movies, then you could do so much worse than Big Bad Wolf. It really is the epitome of the word FUN.