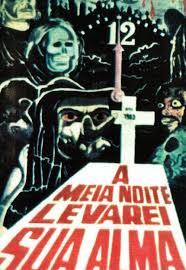 Here we have a classic in horror cinema. The awesome José Mojica Marins brings his Horrific blasphemous creation to life in the fantastical A meia-noite levarei sua alma (At midnight I'll take your soul).

His character, Zé do Caixão (coffin joe) is a blasphemous man with a distaste for all religion and emotion. He is looking for the perfect woman to continue his bloodline, his idea of immortality.

At the beginning of the movie, Zé finds out his wife cannot have children, and begins making advances towards his best friends fiancée, Terezinha. She rebuffs his advances, which then plunges her and her fiancée into danger.

This movie has such a dark atmosphere. The intro alone is enough to chill the blood with  Zé do Caixão's ideals being the focal point and introduction to the characters flawed philosophy.

For a movie made in 1964, a lot of taboo subjects were covered. Rape, blasphemy and the beating of women. Not forgetting the torture scene involving a live tarantula!!

There are also a couple of scenes of gore, and although it looks cheap, it still comes across as shocking, even today.

In my opinion, Coffin Joe is the greatest horror icon you never knew.Decked out in his black cape and top hat, with his terribly long and razor sharp fingernails making him instantly recognizable.

This movie is groundbreaking in every possible way, epitomizing everything that should be in a great horror film eg. a scary villain, amazing sets (which were all apparently one room dressed to look differently), inventive cinematography that brings Bava to mind, and some brutal gore scenes. Wasn't that something back in 1964??

The movie is also incredibly honest in every sense of the word. Coffin Joe broke all the rules, attacking religion, his graphic depictions of violence and his inability to take no for an answer, his will knowing no bounds.

Any horror fans out there that have yet to discover the deliriously crazy world of Coffin Joe are in for such a treat. The film is truly atmospheric, and it stays with you long after viewing. It is also way ahead of it's time. At midnight I'll take your soul is a horror film buffs dream (or should that be nightmare) come true, and is essential viewing. Coffin Joe is without a doubt one of the unrecognized greats of horror cinema, and everyone in the world should without a doubt recognize the name José Mojica Marins.

This movie is the firs part of a trilogy, which continues with "This night I'll posses your corpse" and "Embodiment of evil", both of which I will be reviewing in the future. If you have yet to experience Coffin Joe, what are you waiting for??